Centurion 169041 is likely the only tank in history to have been hit by an atomic blast and not only survive, but fight in combat afterwards. This tough old tank was designed to fight the Germans in WWII, but proved itself capable of standing up to a nuclear bomb too.

This particular Centurion was subjected to a 10 kiloton nuclear bomb from a distance of around 400 meters in the Australian Outback. Test crews returned expecting to find pieces of what was once a Centurion scattered around the site, but they were shocked to the tank in one piece and still functional.

Centurion 169041’s unique distinction of living through the test was reflected by its well earned nickname: The Atomic Tank.

Okay, 400 meters away is not exactly the epicenter of the blast, but it is still an incredible feat of durability to have survived at all.

But The Atomic Tank didn’t just survive, it thrived.

It carried on in service, being overhauled and then sent into combat in Vietnam with Australian forces. While there it was struck by an RPG and then, finally, in the 1970s she was retired to parade duty, and is still around to be seen today.

Here is the incredible story of The Atomic Tank.

The United States of America was the first, and so far only nation to have ever used nuclear weapons in combat. It was able to do this via the enormous Manhattan Project, which saw some of the smartest brains on the planet work together to solve the atomic riddle.

Prior to the Second World War, Britain was actually further ahead with this research than the US, but Britain’s atomic weapons programme, codenamed Tube Alloys, was absorbed into the Manhattan Project in 1943.

After the war the British government fully expected this collaboration to continue, but it was abruptly terminated by US Congress in 1946 with the McMahon Act. This essentially denied the US’ closest allies, including Britain, access to its nuclear research.

As weapons tests were needed, the government looked to conduct these experiments in far-away and spacious Australia.

Australia was considering acquiring nuclear weapons for itself at the time, so British Prime Minister Winston Churchill sought permission to test nuclear technology down under. A series of tests were conducted between 1952 and 1957.

A remote location named Emu Field in South Australia was selected for the second series of nuclear weapons tests, which were codenamed Totem.

Besides testing the atomic bombs themselves, both governments decided to subject various pieces of military equipment to both blast and radiation effects as normally seen with such tests.

Mainly worn-out equipment was used to reduce costs, but as the survivability of battle tanks during atomic blasts was an important priority it was decided to include a brand new Centurion tank for the first Totem test.

Accordingly, the Australian Army was directed to provide a Centurion tank and deliver it to Emu Field.

It mounted the standard 20-pounder (84 mm) main gun, and armor varying from 51 mm on the vehicle sides and turret roof to 118 mm on the front of the hull, and an impressive 152 mm on the turret front.

Getting such a massive vehicle to Emu Field posed a major logistical and technical challenge for the Australian military. Shipped by rail to South Australia, Centurion 169041 was transferred onto a truck and trailer, which could barely cope with its weight.

The overland journey to the test area was a tortuous nightmare, with the trailer often bogging on the sandy desert tracks leading to Emu Field. At times the tank was unloaded and had to actually tow both truck and trailer to firmer ground where the Centurion could be reloaded, and the trip resumed.

The truck and trailer were eventually abandoned when the track became too rough, and the tank drove the last 170 miles (270 km) to the test site under its own power.

Totem 1 was an atmospheric test, and as such the device was suspended from a gantry above the desert floor. Centurion 169041 was positioned about 400 metres (1,300 feet) from the epicentre, with a full load of ammunition, engines left running and the brakes off.

Dummies with radiation badges were left in the crew positions, and the hatches were closed and locked.

After several delays due to weather and technical issues over the preceding week, Totem 1 was detonated at 0700 on the 14th October 1953.

It produced a blast yield of approximately 10 kilotons. For comparison, this was smaller than the 20 kiloton “Fat Man” bomb dropped on Nagasaki, Japan.

The test committee had fully expected Centurion 169041 to be completely destroyed by the blast, as any sane person would. However, they were pleasantly surprised to find it in a relatively undamaged state after the test – albeit knocked one and a half meters backwards.

The engines (both main and auxiliary) had only ceased to operate because of running out of fuel.

The blast had stripped off radio aerials, blown off the skirt armour around the tracks, and sandblasted the paint and vision optic prisms, but otherwise the tank was basically intact.

The hatches had blown open and the crew positions were contaminated by radiation, but it was judged that had the crew hatches remained closed the occupants would have been protected from radiation fallout by the Centurion’s thick armour – at least for a while

However, being this close to a nuclear blast, radiation is the least of your concerns. The proximity of 169041’s position to the blast meant that the crew would almost certainly have been killed by the shockwave.

After some minor repairs and some fuel the Centurion was driven under its own power most of the way back to Woomera Test Area – only then was it properly decontaminated.

There are some reports that the radiation had tragic results for the vehicle support crew, with some stating that twelve out of the sixteen support staff succumbed to various radiation-induced cancers after British nuclear tests had been completed in Australia.

It is important to note however that this has not been independently verified.

After some time as both a training and tow vehicle, a series of overhauls and refurbishments saw her upgraded to the Mark 5 standard by 1960, and to the Mark 5/1 by 1968.

As part of ‘C’ Squadron, 1st Armoured Regiment, Centurion 169041 found itself at Nui Dat Combat Base in early 1968, where she became the troop corporal’s tank with the call sign of 24C.

In May of that year, the entire ‘C’ Squadron was driven 75 miles (120 km) to Coral base, where 169041 and her companions became engaged in the fierce fighting during the Battle of Coral-Balmoral.

For a week, the squadron helped repel savage NVA attacks on the base perimeter, and also took part in several counter-attacks on enemy positions, where the firepower of the Centurions was vital to the efforts of the Australian infantry in overcoming their opponents.

During this battle and subsequent operations the Centurions were struck multiple times with RPG-2 missiles, but the thick armour of the tanks prevented serious damage.

Centurion 169041 was to eventually suffer some battle damage in May 1969, when during a firefight an RPG-7 round penetrated the fighting compartment and wounded most of the crew, one of whom had to be evacuated.

However the rest of the vehicle crew continued the action, with the tank itself remaining battle-worthy. It is a testament to the toughness of the Centurion that American observers were often amazed at the battle scars they received and still remained in service.

Further proof of the effectiveness and safety of the Centurion is that only two tank crew members were killed in action during the entire span of the platform’s service in Vietnam.

With the eventual wind down of Australian forces in Vietnam, 169041 was sent back to Australia and placed into storage.

Several refurbishments and overhauls followed, and the doughty old Centurion found herself back in service with the 1st Armoured Regiment at Puckapunyal.

Centurions served as front-line equipment until November 1976, when the Australian Army received the first of her new German Leopard 1s to equip the Royal Australian Armoured Corps.

169041 served out the rest of her active service as a parade ground guard during formal armoured reviews.

Centurion 169041 had a distinguished service career, with few armoured vehicles having had such an incredible record over their operational life.

To this day, it is the only armored vehicle of the many nuclear test subjects to participate in active combat after surviving a close nuclear blast – testimony to her designer’s intent, and her own inherent toughness.

Unlike many of her brethren who were scrapped or otherwise disposed of, fate has been kind to 169041. Most sources state that she is located at Robertson Barracks, Northern Territory, but she is now on display at RAAF Base Edinburgh, South Australia. 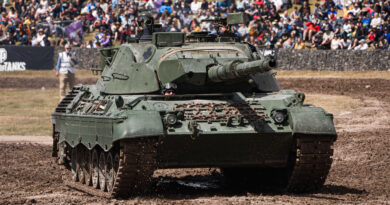 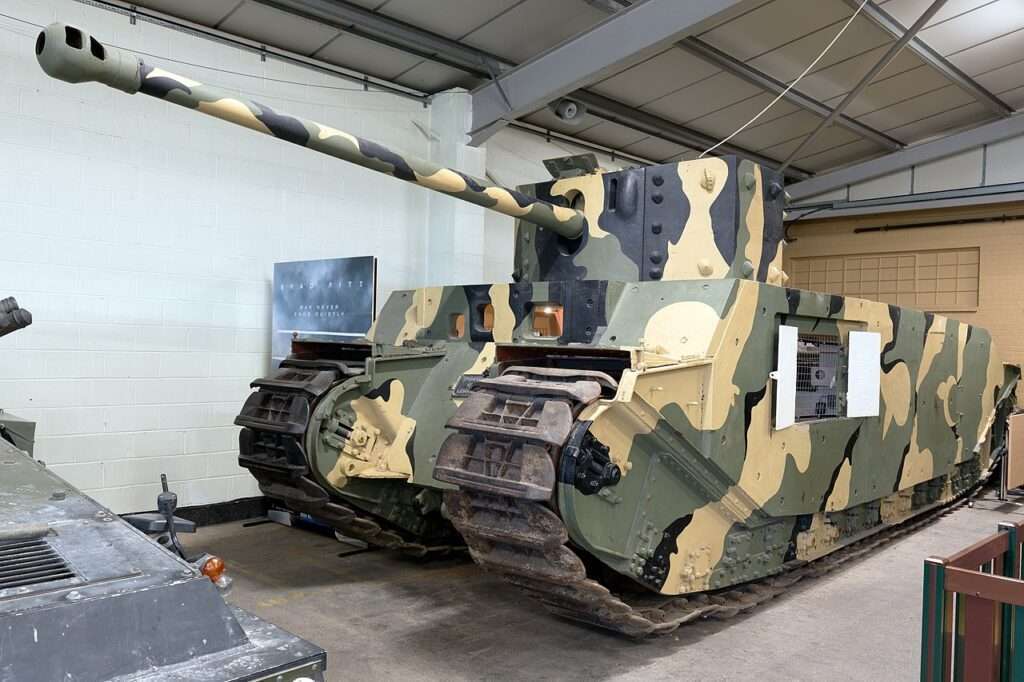 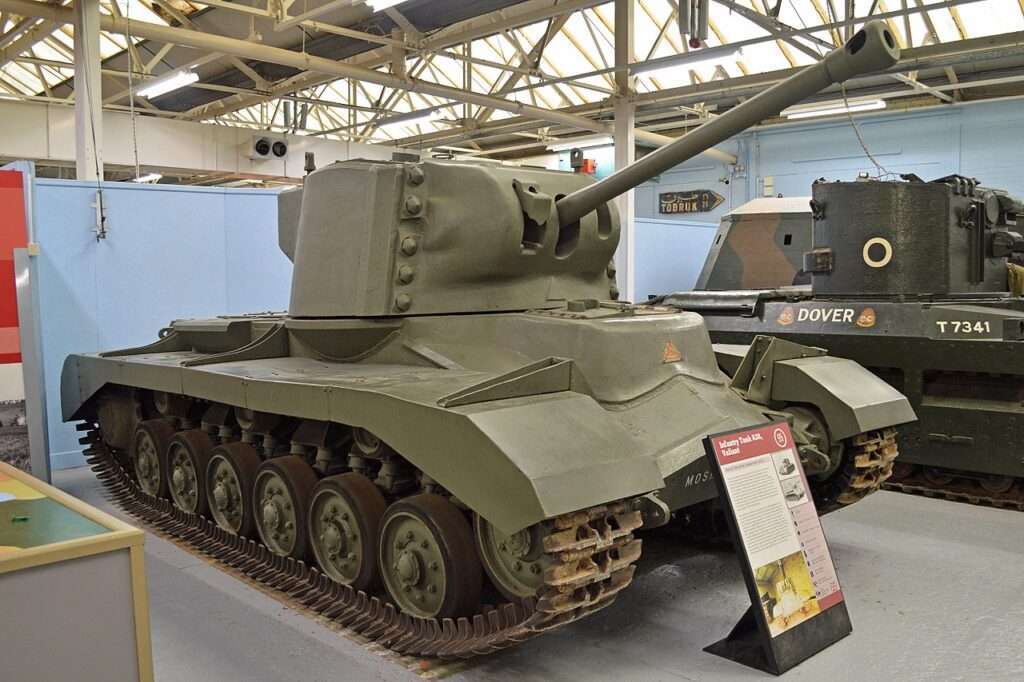