The FV4005 ranks in the upper echelon of extreme military vehicles. This self-propelled gun remained relatively unknown over the decades since its creation, but after featuring in popular games such as World of Tanks and Warthunder, the FV4005 has become both a legend and a meme.

The basis of this armored fighting vehicle was the humble Centurion. But the turret it carried was anything but humble.

Inside this turret, which has become affectionately known as the “S**barn”, is an enormous – and completely overkill – 183 mm gun.

Designed as a stop-gap solution until the 183 mm FV215 was ready, the FV4005 was a way for the British to get this weapon in the field quickly.

The end of WWII was followed by a number of high profile celebratory parades by the Allies; one of the most notable being the Berlin Victory Parade of 1945.

The Soviets used the parade to unveil their new IS-3 heavy tanks to the world. These were entirely different beasts from what had come before it.

The sight of these heavily armored and armed pike-nosed beasts rolling through Berlin marked a new era of tank design and was a major shock to the Allies, who had nothing that could match such formidable machines.

Fearing they had been left behind, in the years following the end of WWII they scrambled to level the playing field. In reality, these tanks weren’t as capable as first thought.

To combat them, the British came up with the Tank, Heavy No. 1, 120 mm Gun, FV214, also known as the Conqueror. Meanwhile, the US produced the M103. Both of these tanks were heavily armored and incredibly powerful, and both used the same 120 mm gun.

With sabot rounds, this mighty gun could pierce nearly 450 mm of armor at 914 meters. This was plenty to deal with the IS-3, but the British didn’t know that at the time. So, they went looking for more firepower.

A specification for a new gun was issued, which had to be capable of penetrating 152 mm of armor sloped at 60 degrees from a range of 1,800 meters.

In 1950, the response to this was the Ordnance, Quick-Firing, 183 mm, Tank, L4 Gun, which was the biggest task-specific anti-tank gun ever built, a record that still stands today.

The only ammunition type developed for the gun was HESH, which is advantageous over kinetic energy rounds as it doesn’t loose penetration over distance.

The ammunition was so large that it had to be loaded in two pieces.

The projectile weighed a staggering 72.5 kg while the propellant weighed another 33 kgs. The L4 alone weighed 4 tons, and upon firing produced 95 tons of recoil.

To vent the vast amount of burnt propellant gasses after firing, the gun featured a large fume extractor about halfway down the barrel.

While a clean penetrating hit was desirable, the L4 was designed to knock out tanks even if it didn’t pierce their armor.

Like an enormous fist, the 183 mm rounds were capable of knocking out tanks with their sheer kinetic energy, no matter where they hit.

When the L4 was tested in live fire trials, it punched the turret of a Centurion clean off its hull, and split the gun mantlet of a Conqueror in half.

This ridiculously large gun needed an equally beefy platform to carry it. The FV200 series chassis was selected (the basis of the Conqueror) for this role, leading to the development of the FV215.

Because the threat of war was a constant worry and the FV215 would take a while to be ready, the British planned to mount the massive L4 gun on an existing chassis.

This would become the famous FV4005.

The Centurion was chosen for this, as it was readily available and by no means dainty. Three Mk.3 Centurions were brought in and had their turrets removed and a recoil spade and gun lock fitted. Apart from a few other minor modifications, the hulls were essentially standard.

The vehicle came in two main types; Stages 1 and 2. Stage 1 was mostly a proof of concept for the L4 gun. The gun was locked vertically and was mounted on an open platform. The “turret” could rotate a full 360 degrees, but firing was limited to forward arc.

The rear-mounted spade helped transmit some of the recoil to the ground.

The Stage 2 is a more accurate representation of what the finished vehicle would have looked like. The gun was now covered by a large superstructure, which, to limit the vehicle’s weight, was just 14 mm thick – just enough to stop small arms fire and shrapnel.

This didn’t matter too much though, as the FV4005 would have sat at the rear of the battle firing shots from long range.

Two hatches were located on the roof for the commander and gunner, while a large door at the rear provided access for the crew. It was also used to load ammunition through, which would be lifted up via a winch on the back of the hull.

12 rounds were carried in the turret and were loaded by two loaders. It is often stated that the FV4005 featured an autoloading system, but neither the Stage 1 or Stage 2 featured such a device. The confusion likely comes from the Stage 1’s loading assist mechanism, which was omitted on the Stage 2.

Like the Stage 1 though, the enclosed-turret of the Stage 2 was fully rotatable, but could only fire in a limited frontal arc.

The vehicle underwent successful trials, but the advent of anti-tank guided missiles and improvements in ammunition meant the FV4005 was no longer necessary.

In addition to this, the Soviets never produced their dreaded heavy tanks in massive numbers. The project was cancelled in 1957, as was the FV215.

The three prototype vehicles (one Stage 1 and two Stage 2s) were dismantled and shared around establishments in Britain. Somehow a Stage 2 turret found itself at The Tank Museum, Bovington and was eventually mated to the hull of a Centurion, where it remains today. 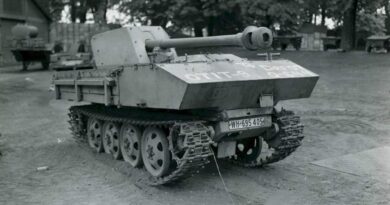 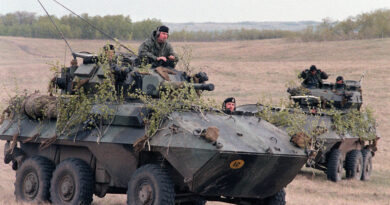 The Cougar – Canada’s little Tank Trainer that could 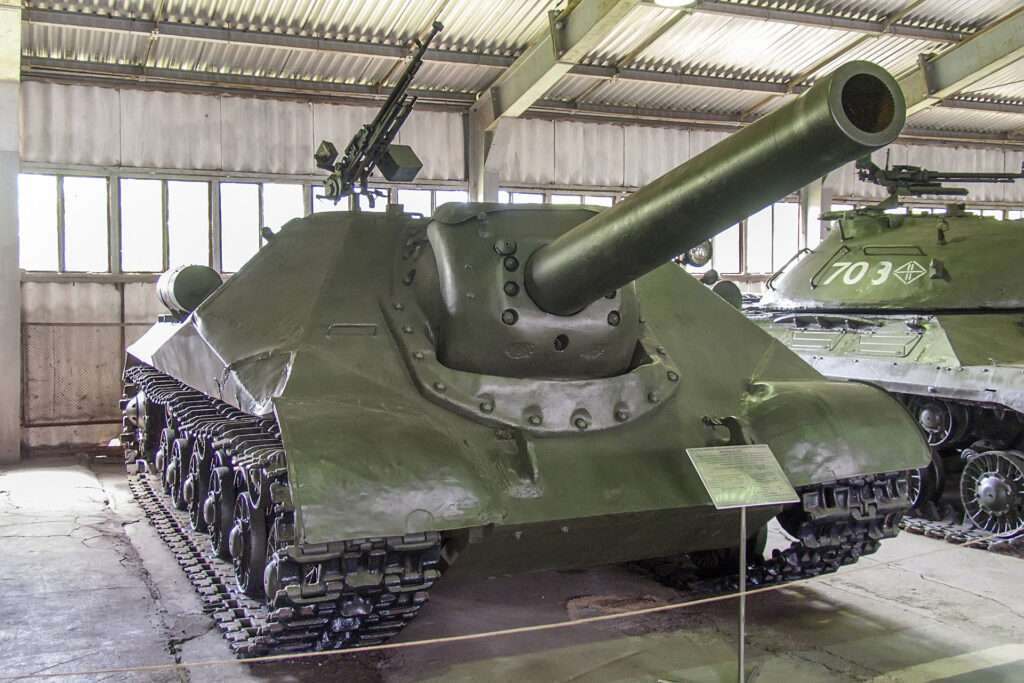