Australia’s role during the Second World War was not one of tank development, but they still produced interesting tank, the AC Sentinel. This vehicle, and its subsequent derivatives, were developed by a country with almost no experience in designing or building tanks.

Despite this, they managed to produce a vehicle that in many ways could rival the staple Allied tank of the war, the Sherman.

Early versions were rather under-gunned, but one variant, the AC4, was fitted with the mighty 17-pounder gun.

The commencement of the Second World War saw all the Allied nations almost universally unprepared for the conflict. This sad state of affairs came about because of lingering effects of the Great Depression, and national rearmament programs that only commenced in the 1930s when it was recognised that war was inevitable.

Australia in particular found itself vulnerable, especially after December 1941 with the majority of the army campaigning in the Middle East, the greater part of the Royal Australian Navy on operations in the Mediterranean and elsewhere, and the Royal Australian Air Force critically short of modern combat aircraft.

Accordingly, the Australian General Staff instigated a program in November 1940 for the design and manufacture of a locally produced tank, while desperately trying to source armoured fighting vehicles from Britain and the United States.

The imminent threat of Japanese blockade and invasion and later reports of Japanese tanks being successfully employed in the Malaya campaign saw an indigenous design for a cruiser tank completed by late 1940. The resultant program produced the AC1 tank, named the ‘Sentinel’.

This became the base for a number of improved and up-gunned versions of the AC1 which culminated in the Australian Cruiser Tank Mk IV, or ‘Woomera’.

This penultimate design of an Australian tank had an interesting genesis, and it is necessary to examine the earlier models from which the AC4 was descended from, as the previous marks contributed to the final design of the Woomera.

The AC1 had a lower hull design derived from the M3 Grant, small numbers of which were starting to equip the Australian Army.

As excess production of rolled armour was not available for this project, the solution was to cast the hull and turret as single pieces, and temper these components in specially designed furnaces.

The R975 radial engine used in the M3 was not locally available, so three V8 petrol engines were consolidated into one unit to provide propulsive power to the AC Sentinel.

The design of the Sentinel was suspended and a new model known as the AC2 was proposed, which utilised many local components in the suspension and driveline and was consequently lighter, but the military disliked this design and production reverted back to the original AC1 design with some localised improvements.

The realisation that the 2-pounder was inadequate in modern armoured warfare, and problems with the power pack led to an upgraded design known as the AC3, or ‘Thunderbolt’.

This was a major redesign of the Sentinel and was a great improvement on the AC1, which had a production run limited to only 65 units.

The mounting and unification of the three V8 engines was greatly improved (with the new design of the power pack becoming known as the Perrier-Cadillac), and the new vehicle mounted the 25-pounder gun. This weapon had excellent high-explosive capability, but retained an adequate armour-piercing ability as well.

The hull machine gun was removed, which allowed easier storage of the larger ammunition for the 25-pounder.

Despite being shorter, quicker and more heavily armed than the base M4 Sherman, only one Thunderbolt was ever fully completed (one other hull without a turret was also manufactured), with the program cancelled in favour of the AC4.

The recent Allied combat experiences in tank warfare provided large amounts of feedback, which was then utilised in the design of various armoured vehicles on the drawing board, or modifications of existing models.

This process affected Australian tank manufacture and procurement in late 1942.

While the Thunderbolt was an excellent design, the savage armoured fighting in the North African campaign exposed the glaring deficiencies in current Allied tanks, particularly in main armament.

With local manufacture commencing of the powerful 17-pounder (76.2 mm) anti-tank gun, the decision was taken to incorporate this weapon into the design of the Australian Cruiser Tank, and a refinement of the AC3 model started, which became known as the AC4.

While the hull design was almost identical to earlier models, a wider 70-inch turret ring was provided, to accommodate a newly-designed larger turret to allow mounting of the 17-pounder gun.

Read More The Kugelpanzer Ball Tank – What is it?

This weapon was known for its fearsome recoil, and the Australians came up with a novel method to test the suitability of the hull to withstand this firing shock. This was accomplished by mounting two 25-pounder guns in a test turret and firing both weapons simultaneously. This produced greater recoil than the 17-pounder, so if it could survive that, it could survive the latter.

With this test completed on the 2nd November 1942, tentative approval of the design was granted and a prototype was authorised for manufacture.

The hull modifications to allow for a larger turret led to some re-design of the bogies, which were spaced further apart, and a new model of track was provided for the AC4.

This led to a lower ground pressure for the vehicle, and, with the retention of the improved Perrier-Cadillac 400 hp power pack from the AC3, it had good performance figures. It had a top speed of 32 mph (56 km/h), despite the vehicle weight increasing to 32 tons.

The 17-pounder guns on the AC had the same Vickers co-axial machine gun of the earlier models, and stowage for 50-60 rounds of main gun ammunition was provided, being a mix of high-explosive and armour-piercing shells.

All these modifications and re-design work meant that the AC4 had slowly morphed into a medium pattern, even though the final product was still officially referred to a cruiser tank.

The hull armour thickness was identical to the earlier models, with the thickest part measuring 65 mm. As mentioned, the turret had been enlarged to accommodate the 17-pounder gun. Its armor profile was slightly different, with a bigger bustle and angled rear.

Great Britain had provided help for the design and manufacture of the Australian Cruiser Tank series in the form of a senior officer from the British Army, and his reports back to London so impressed the War Office that they requested several examples be sent back for evaluation in England, the first of such to be equipped with the 17-pounder gun.

However, while one AC1 Sentinel was shipped back to the UK (which can be seen today in The Tank Museum, Bovington) the entire AC program was abruptly cancelled in July 1943.

Because of this, the AC4 didn’t receive a formal name, though the Aboriginal ‘Woomera’ was proposed for production vehicles.

There were several reasons for the termination of the project, namely that the US’ production of arms and munitions was filling the arsenals of the Allies by this period of the conflict, and because the Americans had requested Western nations only manufacture vehicles and aircraft to standard designs, to reduce costs and complexity.

While the AC tanks were cheaper and easier to manufacture than US designs, American insistence on standard designs prevailed.

As the US was the only source of components like synchromesh gearboxes, which were too difficult to manufacture locally in Australia, all production of indigenous tanks was halted.

The workshops involved reverted back to their original purpose of making locomotives for the local rail network.

When the Australian Cruiser Tank project was terminated in 1943, the very nature of the war had changed for Australia since the desperate early period of the conflict, where it faced a potential blockade and invasion by Imperial Japanese forces in 1941-1942.

The fighting in North Africa had wound up by 1943, and Australian forces were campaigning in the South-West Pacific Area of operations, where the need for armour was limited by terrain. Most fighting in this region was mainly conducted by infantry formations, with support from artillery assisted by air and naval firepower.

Independent Australian armoured regiments did fight in this theatre, equipped with M3 Stuarts at first, and later Matilda IIs which were better suited to supporting the Australian Infantry in the slow, grinding jungle warfare.

Australia did raise an armoured division during the Second World War, equipped mainly with M3 Grant medium tanks and Stuarts, but this formation never left the shores of the nation, and was disbanded after VP Day.

The AC4, and the AC series as a whole never saw combat service nor did it see active duty in any sense, with manufacture of the AC3 and AC4 being curtailed after prototyping, and the AC1 Sentinel only having a limited production run.

The entire fleet was placed in storage and sadly mostly scrapped after the war was over, with only a few examples retained for display in museums.

Ironically, the only recorded employment of the Sentinel in any number was as stand-ins for German tanks during the filming of the war movie ‘The Rats Of Tobruk’.

So how might the AC4 fared in combat? Any speculation of this matter is only hypothetical in nature, but there is reason to believe that the AC4 would have performed reasonably well, especially as originally intended during any possible invasion of the Australian mainland by Japanese forces.

Australia is a country well suited to tank warfare, with open flat terrain permitting fast-moving armoured manoeuvres, and the AC4, with its mobility and superior firepower provided by the 17-pounder probably would have been overkill against the light tanks employed by the Imperial Japanese Army of this period.

Similarly, had the vehicle been provided in any number to Australian forces during the North African campaign, it also may have given a good account of itself when facing the light tanks employed by the Italian Army from 1941-43.

Its 17-pounder gun would have given the AC4 excellent longevity, with only the Germans fielding a small number of tanks that could challenge the punching power of this weapon.

In conclusion, the AC tank was an excellent design brought about by the dictates of necessity, when the war on the Australian mainland seemed likely, and without the possibility of securing any tanks from her allies.

It remains an example of Australian design prowess in armoured vehicles, as the AC had successfully mounted the 17-pounder as main armament a full year before the Sherman Firefly came into existence.

This was achieved by a nation with virtually no prior tank-design experience. 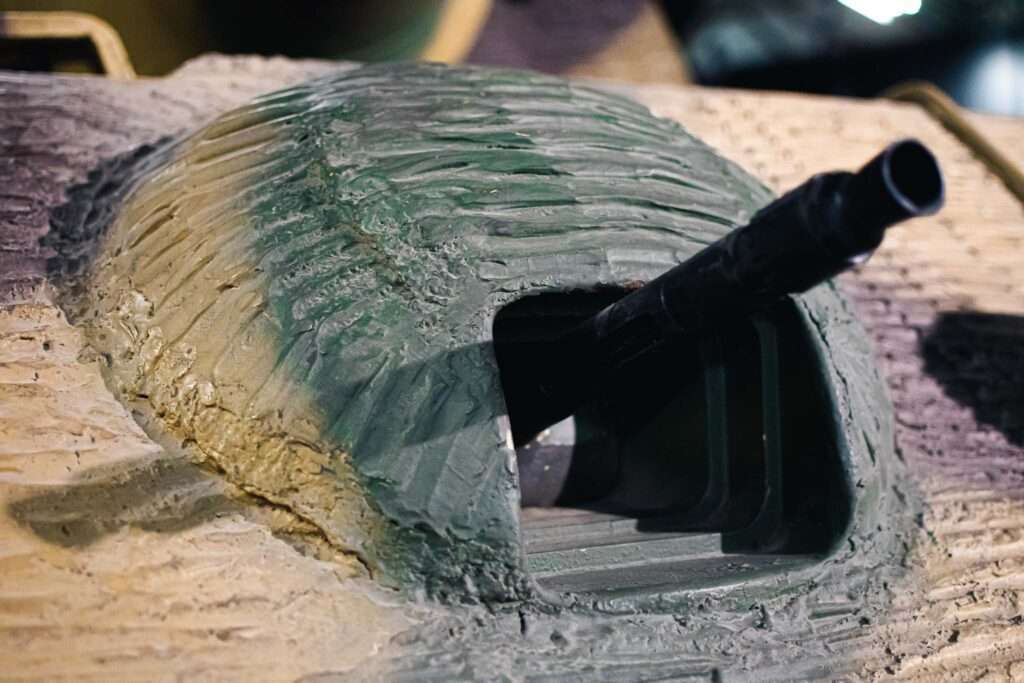 Zimmerit: What is the Rough Texture on German Tanks?